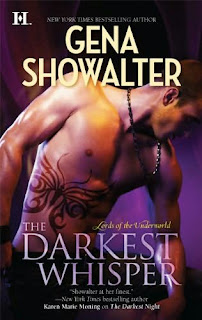 This is the 5th book in the Lords of the Underworld series by Gena Showalter and the story of Sabin and Gwen.

Bound by the demon of Doubt, Sabin unintentionally destroys even the most confident of lovers. So the immortal warrior spends his time on the battlefield instead of the bedroom, victory his only concern - until he meets Gwendolyn the Timid. One taste of the beautiful redhead, and he craves more.

Gwen, an immortal herself, always thought she'd fall for a kind human who wouldn't rouse her darker side. But when Sabin frees her from prison, battling their enemies for the claim to Pandora's box turns out to be nothing compared to the battle Sabin and Gwen will wage against love.

I know that these books have the same premise: Demon possessed ex guardian of the gods finds his soul mate and demon is tamed. Much sex and happiness follows.

But even knowing that, I really like this series and look forward to each new installment because each demon is different and effects their male host in a different way. That is what makes this series so appealing to me.

Honestly the one that intrigues me the most is Torin. He carries the demon of disease and can not touch another being without releasing disease and killing whoever he touches. I can't wait for his story.

And Cameo, the only female Lord. She carries the demon of Misery and every word that she utters holds all the worlds misery. No one wants to hear her speak - she has compelled people to kill themselves with just the sound of her voice.

So even though the premise of each book is the same : demon bound guy + girl = happiness. It is one of my favorite series and I eagerly await each new installment.

Posted by Michelle Greathouse at 8:25 AM

Lovely review...I haven't read this series...what is wrong with me!!!

I love this series too and can't wait to get my hands on this one.

I look forward to reading your review. :)

I love this series too! I am so excited to see that she is releasing more. You forgot to list the ebook The Darkest Prison though...it was good!

Happy you enjoyed this one Michelle!

I'm not a fan of this series but that is just me. lol

I know lots of folks who just love it...

Thanks for sharing
Best
L

I do need to read book 1! :D I am so happy I got it, and now I can't wait. All those demons sounds cool

The demon lord that I'm looking forward to the most is Amun. I'm dying to know his secrets!

OMG!!! I love this series. Glad to see you enjoyed it, now ever so eager to read it.

I've listened to a couple of these as audio books and enjoyed them. This one sounds like anoither enjoyable PNR.

I am looking forward to the release of the collection of non -published stories by Gena - it will include the e-book. :)

Thank you for stopping by. :)

I can't imagine what it must be like for him to have all those secrets floating around in his mind all the time. :)

I'm looking forward to your review. :)

I have enjoyed all of them - some more than others - Reyes' book was my least favorite - but I still enjoyed it. :)

Thanks everyone for stopping by. Have a wonderful evening.

I did not read the review... but I wanted to come by to let you know that when I do read this one... I am coming to read your review!!! Just wanted to give you a shout out for HI!!!
I hope you had a great weekend and a wonderful Monday!

LOL Cecile. :) That is okay with me and thanks for stopping by and saying Hi.

Really liked the first book, haven't been able to get into the second book. Maybe I should go back and revisit....possibly it was just the wrong book at the wrong time - it happens!