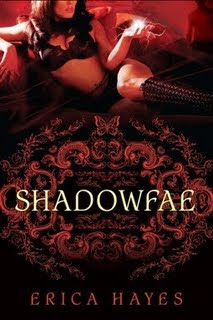 This is a novel by Erica Hayes.

Imagine a secret world veiled in fairy glamour and brimming with unearthly delights. A city swarming with half-mad fairies, where thieving spriggans rob you blind, beautiful banshees mesmerize you with their song, and big green trolls bust heads at nightclubs. And once you’re in, there’s no escape…
Enslaved by a demon lord, Jade is forced to spend her nights seducing vampire gangsters and shapeshifting thugs. After two hundred years as a succubus, she burns for freedom and longs to escape her brutal life as a trophy girl for hell’s minions. Then she meets Rajah, an incubus who touches her heart and intoxicates her senses. Rajah shares the same bleak fate as she, and yearns just as desperately for freedom. But the only way for Jade to break her bonds is to betray Rajah—and doom the only man she’s ever loved to a lifetime in hell.
Shadowfae was a good read. :)
This book has been coined an erotic dark fantasy - and I will agree with that - but it is not erotica. Shadowfae has its' fair share of sex - but that in itself is not the plot - more of a means to an end.
Jade has it rough. She is enslaved to a demon lord that could really use some therapy. He has no confidence in himself - and hey, who wants to feel sorry for a demon lord? But there you have it - Kane needs a hug and then he needs to be vanquished - cause demon lord....
Due to Kane's lack of confidence and a girl/boyfriend - he has a lot of time on his hands and he gets lonely and bored. Isn't there a saying about boredom being the devils' play thing? Or is that idleness? Whichever, Kane needs a hobby because when Kane gets bored - things die.
I like the character of Jade - but you would figure after 200 years of living with preternatural creatures she would have a little more knowledge about their habits. Jade comes across as naive - and who can believe a 200 year old succubus could be naive? It just doesn't ring true - I'm hoping she gets a firmer back bone in the next book.
All in all Shadowfae was a good read - enough of one that I am looking forward to the next installment - Shadowgalss - due out in April of 2010.
I give Shadowfae 3 out of 5 stars. :)
M
Posted by Michelle Greathouse at 8:37 AM

Yeah after 200 years she really should know some thing.
Still sounds very nice

I just got this book - I didn't realize she was a succubus, I thought she'd be a fairy. Interesting.

I am looking forward to reading it.

I agree. She acts surprised by some of the things the vamps do - and I just shook my head.

I did as well - based on the title alone....I'm looking forward to your thoughts. :)

Thank you for the very honest review Michelle.

Hmm...I bought this one but I'm hoping that I find to be better then you described. It has such promise!

It was a good read - but I expected more. I look forward to your review. :)

I've been hearing so much about this book! The cover keeps popping up on all the book blogs I follow.
Your review has me hesitating. I already have a favorite series with a succubus protagonist ('Georgina Kincaid' by Ricelle Mead) - so I might hold off on buying this one, wait for the library to order it in.
Great, honest review.

I fell victim to all the book hype and ran right out and bought it. LOL

The Georgina Kincaid series by Richelle Mead is one of my all time favorites. I was surprised to find a mass market edition of the first book in Wal-Mart - that is such a wonderful thing - mass market editions will garner a whole new set of readers. :)

This is one of those books I really have wanted to read - I enjoyed your review! :)

I have this one, I want to read it so bad! Like VFG, I'm hoping I get more from it also. I have such high hopes from reading the free prequel short story.