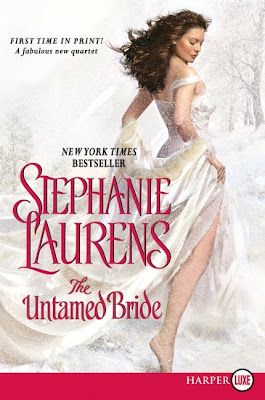 This is the first book in the new Black Cobra Quartet by Stephanie Laurens.

They're battle-hardened, sinfully wealthy, completely unstoppable—and all male:
Four officers of the Crown, fighting against a deadly foe known only as the Black Cobra.
He is a man who has faced peril without flinching, determined to fight for king and country.
She is a bold, beautiful woman with a scandalous past, destined to become an untamed bride.

Together they must vanquish the ruthless enemy, while confronting the dangers of the heart . . .

This is an Avon Historical Romance, and not my usual read - not one vampire, werewolf or critter in sight.

But I enjoyed this book.

When I first began reading I was all about the Historical Romances - I devoured everything I could get my hands on and loved the idea of a White Knight rushing in to save the day. :) Now I'm more about the kick butt woman saving her own ass.....

That being said The Untamed Bride is a great read and it is the first time I have read anything by Stephanie Laurens. I really like Ms. Laurens writing style, she is very descriptive - but not overly so and her characters are very real.

The Untamed Bride reminded me that not all women have to carry a weapon and physically fight in order to be strong - using your brain can oftentimes be the turning point in a situation. Ms. Laurens has given us a very smart character in Miss Deliah - NOT Delilah - Duncannon.

As for Del - Colonel Delborough - he is a career military man - but a gentleman. He acknowledges right away his attraction to Miss Duncannon - but does not wish to place her in danger by involving her in his mission. And then the choice is taken out of his hands....

I am looking forward to the next three books in this quartet - each one about a different Officer on their journey to fulfill the mission to stop the Black Cobra.

Hi Michelle,
Glad you liked it even if no vamps in sight.

Hi, I really love the blurb and will be checking this series out. Thanks for the thumbs up!

Sounds great. I like t5he kick-ass heroines most too. Story sounds great! Will add it to my tbr.
Thanks for the review!

Very nice review! Sounds like you enjoyed the little break from the usual reads. :)

Hey Michelle, I read your review... And I am glad that you enjoyed it. I won this book, so your review just makes me want to stalk my mailman!! LOL!!
Thanks for giving me enough information to make me want it more but not spoil it for me!
Have a great weekend!!

Good for you for trying something out of your usual book preferences.

I just love this cover and have never read anything by Stephanie Laurens either. I think I'm going to give it a try.