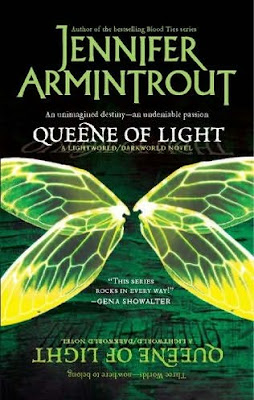 This is the first book in the Lightworld/Darkworld series by Jennifer Armintrout.

An unimagined destiny an undeniable passion.

In a time not long from now, the veil between fantasy and reality is ripped asunder creatures of myth and fairytale spill into the mortal world. Enchanted yet horrified, humans force the magical beings Underground, to colonize the sewers and abandoned subway tunnels beneath their glittering cities.

But even magic folk cannot dwell in harmony and soon two Worlds emerge: the Lightworld, home to faeries, dragons and dwarves; and the Darkworld, where vampires, werewolves, angels and demons lurk.

Now, in the dank and shadowy place between Lightworld and Darkworld, a transformation is about to begin....

Ayla, a half-faery, half-human assassin is stalked by Malachi, a Death Angel tasked with harvesting mortal souls. They clash. Immortality evaporates, forging a bond neither may survive. And in the face of unbridled ambitions and untested loyalties, an ominous prophecy is revealed that will shake the Worlds.

Queene of Light is a pretty good read. I am intrigued by the separation of 'others' and how they have set themselves apart from each other - when I think they would be so much better off if they were united. :)

Ayla is a lowly assassin - and I do mean lowly. She is looked down upon for her human blood - and that makes her have to work twice as hard as the full blooded fae.

Malachi is a Death Angel - working for God. He looks down upon Ayla and her kind because they do not accept God as the one true God. Malachi is not supposed to touch a mortal - they are to be protected. Malachi does not know that Ayla is half human - and when he touches her he looses everything he holds dear.

What comes next is betrayal and court politics - Ayla is thrown into a world she never wanted - but one she vows to conquer........

I give Queene of Light 3 out of 4 stars and have the second book - Child of Darkness - on the tbr shelf. :)

Posted by Michelle Greathouse at 7:00 AM

This sounds like a good read. I'll check it out. Thanks for the review.

I love Jennifer Armintrout! I did an interview with her awhile back about this series on my blog before it came out. She is a riot to talk to!

Oh awesome! I so want to read this book, it sounds great

I have this one on my TBR shelf - I'm going to bump it up since reading your review.

P.S. - I am reading 'Rosemary & Rue' after reading your review... THANK-YOU! I am totally loving this book, and you were right - that was a whopper of a prologue!

I loved her vampire series - this one seems like it's going to be good as well. :)

I look forward to your review once you've read it. :) I enjoy your reviews - you also speak your mind and give an honest opinion. LOL

I am so glad you are enjoying Rosemary and Rue. :) I love your reviews as well - you are always honest and straight forward with your likes and dislikes. :)

Have a wonderful evening ladies.

Thanks for the review ! Now, i guess i have to speed up my reading and turn to Jennifer's books.
I won book " Queen of the Light" and they gave me a bonus book " Child of the Darkness" on the end of Last September. And they're still in my TBR's shelf :)