Cover & Promo: Lord of the Abyss by Nalini Singh 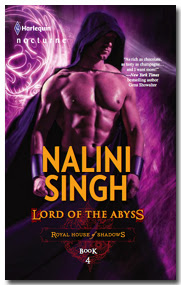 Lord of the Abyss by Nalini Singh is the fourth book  in the four part continuity series called Royal House of Shadows from Harlequin Nocturne.  The four participating authors are Gena Showalter, Nalini Singh, Jill Monroe and Jessica Andersen.
Book Blurb:
Once upon a time…the Blood Sorcerer vanquished the kingdom of Elden. To save their children, the queen scattered them to safety and the king filled them with vengeance. Only a magical timepiece connects the four royal heirs…and time is running out.…
As the dark Lord who condemns souls to damnation in the Abyss, Micah is nothing but a feared monster wrapped in impenetrable black armor. He has no idea he is the last heir of Elden, its last hope. Only one woman knows—the daughter of his enemy.
Liliana is nothing like her father, the Blood Sorcerer who'd cursed Micah. She sees past Micah’s armor to the prince inside. A prince whose sinful touch she craves. But first she has to brave his dark, dangerous lair and help him remember. Because they only have till midnight to save Elden.
Release Date:  December 2011
Thanks to Wicked Scribes for the find.  :)
Posted by Michelle Greathouse at 4:18 PM

I just found out about this on Nalini's blog. I'm very, very excited, as I'm a huge fan. I can't wait to read it, and I'm just hoping that I'll like the stuff by the other authors.

I discovered your blog via the hop and I just have to tell you that I adore your header.

I am looking forward to this 4 part story as well. :)

I'm glad you found my blog. As for the header, I found the image - but I have no clue when it comes to html stuff. I have a wonderfully generous blogger buddy who designed my blog. :)

Do you happen to remember who the graphic artist was? Or what service you used or search terms, etc. In other words, anything that might help me locate a the graphic artist. I'd like to see what else he or she has done.