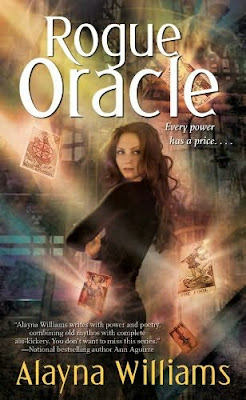 Rogue Oracle is the second book in the Dark Oracle series by Alayna Williams and an Urban Fantasy from Pocket Books.Book Blurb:The More You Know About The Future, The More There May Be To Fear.Tara Sheridan is the best criminal profiler around - and the most unconventional.  Trained as a forensic psychologist, Tara also specializes in Tarot card reading.  But she doesn’t need her divination skills to realize that the new assignment from her friend and sometime lover, Agent Harry Li, is a dangerous proposition in every way.Former Cold War operatives, all linked to a top-secret operation tracking the disposal of nuclear weapons in Russia, are disappearing.  There are no bodies, and no clues to their whereabouts.  Harry suspects a conspiracy to sell arms to the highest bidder.  The cards - and Tara’s increasingly ominous dreams - suggest something darker.

Even as Tara sorts through her feelings for Harry and her fractured relationship with the mysterious order known as Delphi’s Daughters, a killer is growing more ruthless by the day.  And a nightmare that began decades ago in Chernobyl will reach a terrifying endgame that not even Tara could have foreseen....My thoughts:Tara Sheridan is an Oracle - she uses a set of Tarot cards to see the past, present and future.  Once an agent for the Special Projects Division of the Department of Justice - Tara would use her Tarot and her ability as an Oracle to help solve crimes.After leaving Special Projects and surviving a run-in with the serial killer known as The Gardener, Tara now freelances as a profiler - using her Oracle abilities to help the Federal Bureau of Prisons.Now Special Projects needs her help and one time lover Harry Li has asked Tara to weigh in on a case of missing persons.  Using her Tarot has never lead Tara wrong - but can she be where she needs to be before time runs out?Rogue Oracle was a very different read for me.  I did not read the first book in this series, Dark Oracle - but I had no problem reading Rogue Oracle as a stand alone.I enjoyed Rogue Oracle - Tara has been through a horrible experience - but she came through it and it has made her stronger.  I think the label of Urban Fantasy is limiting.  I don’t really consider Rogue Oracle to be just an Urban Fantasy.If an Urban Fantasy and a Romantic Suspense had a child - it would be Rogue Oracle.  I think the reason it was given the distinction of UF is because of the magical influence of the Tarot and Delphi’s Daughters.        So if you like UF and Romantic Suspense - give this series a try.  Rogue Oracle will appeal to readers of both genre's.  I give Rogue Oracle 3 out of 5 stars.


Alayna Williams has offered one paperback copy of Rogue Oracle to one lucky commenter.  Just leave a comment with a valid email addy so I can contact you when you win.  :)
This giveaway is open internationally to all followers of this blog.  Giveaway will run through Friday 3-18-11 and winner will be announced Saturday 3-19-11. 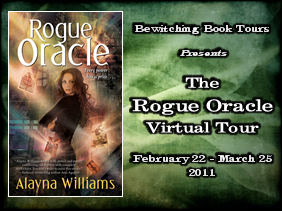 Posted by Michelle Greathouse at 12:01 AM

Wooots...one book that i've been wanting to read. enter my name in :)

Thanks for taking the time to read and review ROGUE ORACLE! I'm glad that you enjoyed it!

Mariska, thanks for including me on your TBR list! :-)

Great review! Thanks for confirming that this series spans genres! I look forward to starting this series :)

Sounds a great read, would love to win a copy.

Not entering since it's book 2, I really should read 1 first ;) Of course winning the 2nd in a series always makes me buy book 1, lol

Ohh this looks very interesting. Will go look up the first one on amazon :)

Hi, Winnie! Yup, this one crosses over into thriller and sci-fi territory. ;-)

Amanda, thanks for dropping by! :-)

Hi, Blodeuedd! I try to keep my books as self-contained episodes with their own beginnings, middles, and ends. There is some overarching mythology, but I try not to get too tripped up in that. It's not necessary to start at book one...though I'm always thrilled when folks do!

emmad, thanks so much for adding me to your list! :-)

This book looks good. Please enter me in the giveaway.
marlenebreakfield(at)yahoo(dot)com

Thank you so much for stopping by and taking the time to read my review. I appreciate all of your comments and feed back.

I did enjoy Rogue Oracle - I have never read a book that employs the use of the Tarot. Rogue Oracle is very unique and I am looking forward to reading more.

That sounds like an awesome book. I love to read things that show growth and perseverance ;)

Thank you, Michelle, for hosting me today! :-)

Hi, Elisabeth! I hope that you enjoy the story. Tara is a flawed heroine, and she has a long road to travel...and like IRL, that results in change and growth.

I love the sound of this cross genre book.

Thanks so much for the amazing giveaway! The book looks awesome!

Thanks, Lisa! I love dabbling in other genres and mashing 'em together...and I love your kitteh cartoon!

Thank you, Carina! I appreciate you stopping in! :-)

New author for me to try, thanks for the review and recommendation!

Add my name to the churning pot!

I'd love a chance to win a copy :) Thanks for the giveaway