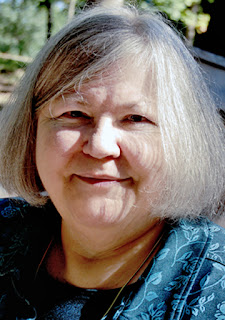 Today Author Dakota Banks is stopping by Michelle's Book Blog with a guest post and a wonderful giveaway to help celebrate the release of Deliverance, the third book in her exciting Mortal Path series.

Thank you, Michelle, for the opportunity to appear on your blog. Hi, everyone!

I love to read. I’ve been a reader ever since I figured out how to hold books right-side-up so the words made sense. The words in early readers tended to be short and plain, without much thought to the beauty of the English language. I came across that part—the beauty—later, when the words had more than one syllable and a lot more variety! I developed favorite words that I loved to say or whisper to myself, just for the wonderful sounds of them. Later still, I learned that characteristic is called euphony: a pleasing effect to the ear. What makes a word euphonious? It’s usually a string of vowels, and you have to set aside the meaning of the word because it’s the sound only that’s involved. I’ve found it also helps if you whisper the words in a breathy voice. Here’s a sample of some of my favorite euphonic words, in no particular order.

And I could go on and on, because I love these words! They sound especially nice whispered into someone’s ear. Your basic handsome hunk gathers his lady in his arms, puts his mouth near her ear, and whispers, “Diaphanous willow.” Works for me.

What would beauty be without its opposite, ugliness? Cacophony describes words that are hard on the ears, regardless of their meaning. Here are some of my candidates. Remember, block out the meaning, focus on the sound.

So our hunk whispers in his lady’s ear, “Grotesque pustule.” He’ll be sent on his way, lucky if he doesn’t get a slap.

What does all of this have to do with writing? I make conscious use of euphony and cacophony throughout my books, and even in the titles. Dark Time, Sacrifice, and Deliverance are all euphonic. I want those titles rolling off the tongue sweetly, even if their meanings are not so sweet. My main character? Maliha Crayne. Whisper it. Ugly words definitely have a role, too: blood, treacherous, gash, scabbard, gut, inflicted, ragged, staggered, knife, torn, pain. Those are all from Chapter One of Deliverance. Action scenes can be filled with ugly words! Most authors make these word choices automatically, but if you’re a new writer, make sure you match the word to the type of scene. “What,” you say, “does it matter if the reader isn’t reading aloud? Whispered words, bah.” Trust me. It matters. The reader’s mind responds!

Here are some titles by other authors I find especially euphonic.

What are some of your beautiful and ugly words?

I love this topic.  Here are my answers:


Now for the giveaway.  Dakota is offering a Mortal Path Swag Bag that contains a tote bag, 3 signed books, pens, bookmarks, magnets, and a calculator. 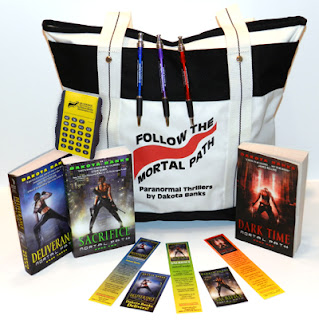 This giveaway is open internationally to all followers of this blog.  Just leave a comment with a valid email addy and you are entered.  Using random dot org, winner will be chosen and announced on 3-29-12. 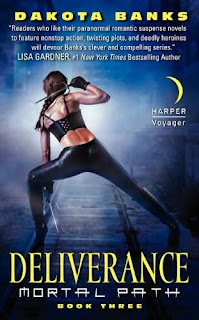 A demon's assassin for centuries, Maliha Crayne has gone rogue, determined to save a life for every one she's destroyed in order to free herself from an eternity of enslavement, damnation, and excruciating torment. But as the powers that sustained her in the past fade, she is wary of trusting those closest to her--especially her lover, Jake. And her friends are beginning to disappear, one by one. Amid her anger, suspicion, and sorrow, her life is spiraling out of control.
Worse still, a beautiful Renaissance murderess is recruiting Maliha as her new assassin. Maliha is turning into a lethal puppet with Immortal pulling the strings, forced to kill innocents or see her missing friends die horribly. Suddenly trapped in a moral no-man's-land, Maliha is damned if she does and damned if she doesn't ... and time is rapidly running out.
Product Details
Mass Market Paperback: 304 pages
Publisher: Harper Voyager (March 27, 2012)
Language: English
ISBN-10: 0062049984
ISBN-13: 978-0062049988

You can find Dakota Banks in several areas on the web:


I'd like to thank Dakota for stopping by today and for the wonderful giveaway she's offering.


Good luck everyone and Happy Reading!

Posted by Michelle Greathouse at 7:56 AM

What an interesting post. Our langauge can be a really beautiful one at times. It is so easy to take it for granted.
I would love to read your books.
twoofakind12@yahoo.com

i'm so happy for this new opportunity to discover your books after the one on preternatura ( i dind't win ç_ç) thanks you so much for thinking about us international.

i loved your post and it's really true. My native language is french and for example i have some difficulties with the other language in my country Vams ( flamish- flamand they can say what they want that's a dialect) for me it hurts my ear, it's aggressive and i get on the defensive. I prefer English, spanish of even some japaneese words.

Thanks you so so much for this giveaway, i hope to be lucky once

Woohoo! Thanks for the contest!

Great topic. Words can be so powerful. There are definitely some that resonate within us and others that repel us. How fun to see an author consciously making use of that! :-)

Great post. I love the sound of the words symphony, serendity, and harmony. Your book sounds awesome. I love the cover. Thanks for the giveaway.
Crystal816[at]hotmail[dot]com

Best guest post I've read in a while.
Loved it!
English is not my mother tongue (I'm from Germany), but OH HOW I WISH it would be haha.
I love the English language..love everything about it.
Thanks so much for making this giveaway international.
*excited*
Please enter me:
Saskia (GFC:_yay_)
Email:
sk_86(at)gmx(dot)de

I have never thought about that, maybe cos English is not my mother tongue but let's see

Ugly:
Ass is pretty ugly when I think about it
Gross

I love the way certain words roll off the tongue. I even have favorite songs because of the way the lyrics FEEL when you sing them.

Thanks for the chance to discover a new-to-me series.

Michelle, I had a great time with this post! Thanks for letting me be a guest on your blog.

You are always welcome, Dakota!

What a fun post! And interesting how the beautiful words are something pleasant but the ugly words describe unpleasant (think barf). I have honestly never thought of words like this before, but when my husband and I had to pick out baby names I was always drawn to names that started with a vowel and had soft sounds, that is how we ended up with a daughter named Alana. So can her name go on my good list? I will leave barf on the ugly =)

and thanks for such an awesome giveaway, your series sounds amazing! Congrats on the newest release!
eyesofblueice (at) gmail (dot) com

What a great post.
Thanks for the great giveaway!!!

Thanks for the great post and the great giveaway. I'd love to win the books, I haven't read them yet and they sound great.

I find that I can totally lose myself in an author's work when that author has good 'word usage'. When the words flow easily, so does my imagination. If the individual words are forced or unnatural, I have starts and stops as I read...focusing on the words and not the content.
....Great post!!

Congrats on the release! Im really looking forward to the new book.

bacchus76 at myself dot com

Just what I need! Another great series to follow. I love paranormal, and find that series allow for a much more in-depth experience into the writers world that stand alone books do.
Please enter me to win the books and swag

word can be wonderful stuff. and since i'm not from an english speaking country, i read english books to enriched my vocabulary.

thanks for to giveaway, and i hope i'll win it this time

What a cool post! There is such power in words. Thank you for the giveaway!

I've had this one on my wishlist since I first saw the cover and read the blurb. Thanks for the giveaway!

I love this series and I can't wait to read the newest book :)
Thanks for the giveaway!
throuthehaze at gmail dot com