Thank you so much to Michelle for having me here today!

In paranormal romance does a heroine literally have to kick ass to be kick-ass? Does she have to be tough or wield an array of weapons to be considered a kick-ass female?

I’ve written my fair share of females who can take down almost anyone when it comes to physical strength. They’re smart, and capable of completely taking care of themselves while also being tough in not just body, but heart. I’ve also penned more than a few stories where my heroines aren’t physically tough, but are intelligent, challenging to the hero and are the backbone of their family in so many ways. And I like to write about females who fall somewhere in between. Some who are physically able kick ass if they have to be, but it’s not the role they would choose without external circumstances forcing them to. Why? Because diversity rocks. Women don’t have to fall into only one role to be accepted and powerful.

I enjoy reading about physically tough heroines—because they’re everything I’m not. (I’m so not a badass so it’s fun to read about women who are.) However, I also really enjoy reading about females who are more like me. My husband was in the Marines and he’s now in law enforcement so I spend a lot time taking care of our family and keeping everything running smoothly at home. I think so many females, whether they’re mothers, wives, sisters or daughters, take on that role in addition to their normal jobs. Often it can be taxing and thankless.

In my current release, Primal Possession, my heroine isn’t physically kick-ass. In fact, she’s a human with no supernatural abilities and she’s trying to come to terms with her new relationship with a dominating shifter who’s incredibly strong. And in Liam’s (the hero) world, physical strength is a big deal. The way they navigate their relationship and differences was a lot of fun to write.

Thank you so much for stopping by today! Leave a comment and be entered to win a copy of Primal Possession (US ONLY), the second release in my Moon Shifter series. 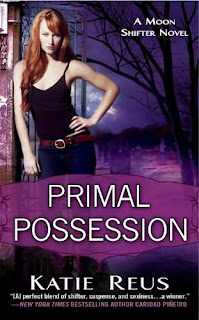 To protect her, he will unleash the beast within…

As his pack’s second-in-command, lupine shifter Liam Armstrong gives orders and takes what he wants—until he meets red-headed, blue-eyed December McIntyre. Liam knows the human beauty is his intended mate the moment he sees her, but December is far too strong-willed to accept his protection.

December, whose brother is the town sheriff, has every reason to mistrust shifters after one killed her youngest sibling. But the forceful and handsome Liam has gotten under her skin in a way she hadn’t thought possible, and the desire she feels for him is almost too much to bear.

When a radical hate group targets all humans known to sympathize with paranormal beings, December is attacked in her bookstore. Reluctantly, she turns to the only one who can help her: Liam. And he is going to take her to places within herself she never knew existed.

A little about Katie: I’ve been reading romance since a young age—ever since I discovered my mom’s hidden stash. Luckily the addiction stayed with me into adulthood. I write paranormal romance and sexy romantic suspense for Carina Press, Harlequin Nocturne, and NAL/Signet Eclipse. To learn more about me please visit my website, my blog, facebook or find me on twitter @katiereus.

I'd like to thank Katie for stopping by MBB today. Remember to leave a comment with a valid email addy for your chance to win a copy of Primal Possession.  Using random dot org, winner will be chosen and announced on Thursday, 9-20-12.

I love to read about tough heroines. Its nice to see that as we all grow older we can take the changes that are going on in the world. Women are coming into their own so to speak..Its rather nice!

I absolutely love your work...the way you build your story keeps me enchanted...

Tough heroines are one of the trends that I really like and hope to see more of. I remember when most heroines were fainting, gasping on every other page and couldn't be left alone for more than a day or else she might go crazy. C'mon, that's ridiculous, so I love these kick ass heroines who give as good as they get.

I like tough heroines and I also like intelligent heroines, and I don't think you can only have one or the other. I also like heroines that don't let their flaws or weaknesses stop them.

I like tough, intelligent heroines----this doesn't mean they have to be weapon wielders with super abilities.

When I sit and think about trying to write a kick ass heroine I don't think I would know where to start. Yes you want her to be physically strong, but not hulking like a body builder, able to take down a 300 lb man/being with out making the reader say "hmmm...really not buying it". Then you still want her to be feminine, at least a little.
Even with December, she isn't physically top dog (hahaha) but she is smart. To write a heroine like her and make her smart and likable but not so weak and fragile she can't hang with the big boys. Talent. Yup you have it (I sure don't ha!). So glad that you can write great heroines so I can read about them =)

Thanks again to Michelle for having me here!

And thanks everyone for stopping by! I really like the different reasons everyone has for why they like the types of heroines they do. I love that there are enough options in fiction for us to choose from too! (And thanks Kristina & Lexi!)

I am so with you! I am not tough at all. I have terrible knees and am a complete wimp. But I love to read about tough heroines. I like just about any type of heroine as long as she isn't whiny. No whining allowed in my books.

Hi, thank you for discussing this details. Was just surfing around through the net in my workplace and occurred upon your web page. It is really very well crafted and quit extensive in describing with a very easy terminology.
Locksmith DC