Amy C over at Romance Book Wyrm and Dottie over at Tink's Place have come up with the idea for a Monday Morning Flash Fiction challenge. Each Monday a new picture prompt will be posted and if you choose to participate - you post your story on Friday - 350 words, give or take.
And here is picture prompt #31: 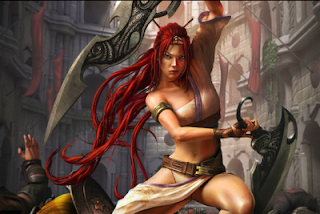 Blade DancerBy Michelle GreathouseTen Years AgoThe Enclave burned, hundreds of people lay dead or dying as the soldiers walked through making sure no one was left alive.  They did not see the old man escape with his granddaughter.The attack was unprovoked.  The Enclave was a peaceful place despite the fact that it was known as the most prominent weapons making Enclave in the territory.  No one made a Blade like the Dancers.  It was that ability to make a Blade sing - and one man’s jealousy - that caused so much death and destruction.  It could not go unpunished.NowShar adjusted the leather strap around her waist and wrists, making sure her tiny blades were concealed.  No sense in giving away all of her secrets.    She could hear the growing crowd, smell the unwashed bodies - and she could think of only one thing.  Finally, the day of reckoning was here.For ten long years she and her grandfather had lived in secret.  Hiding from those who thought the Dancers wiped from existence, along with their ability to forge a blade.Shar learned all that her grandfather had to teach.  She could forge any blade as well as he - but it was her ability to imbue that blade with power - with purpose, that set her apart.  As a Blade Dancer, Shar had no equal.She had buried her grandfather just two months ago.  He now rested beneath a willow tree perched on the banks of a slow moving stream.  He was finally at peace.  Now Shar hoped to gain her own.It had taken the better part of a month to travel to this small village.  She had heard rumors and then fact that the Regent was searching for a new bride.  He was looking at girls as young as eleven summers - for that alone, he needed to die.In his arrogance, the Regent traveled with only a small brigade of soldiers.  Shar knew she would be able to handle them all.“Bring forth the applicants.”  The Regent’s voice boomed from his perch atop the temporary dias that had been made just for this occasion.  Shar peeked around the corner from where she’d stationed herself and saw a line of ten girls ranging in age from eleven to maybe fifteen summers, walking toward the Regent.Using the girls appearance as a distraction, Shar entered the crowd.  She pulled her blades and began to dance.  When it was all said and done, the soldiers lay dead at her feet.  The Regent sat immobile in his chair.Shar calmly walked to the Regent and introduced herself.“I am Shar of the Dancers, and this is my retribution.”  The young girls watched as the Regents head bounced upon the wooden floor.Shar wiped her blades on the Regents gaudy blue cloak.  The crowd was silent, moving out of her way as she walked, head high, out of the village.The EndWord Count: 492

So what do you think?  A little violent - sure.  But he had it coming, seriously.

Have a great weekend.
Posted by Michelle Greathouse at 8:39 AM

Oh, I like it!! Most excellent!! And violent!! But, we've had enough bunnies for a bit... if there were bunnies here, they bled red, lol!

This image did provoke blood letting, at least for both of us. But, it was hard to take it any other way. It was such a great image!! Thanks for providing it.

Wonder what B will come up with, if she has time that is... kindergartens are hard work!!

OOh I really liked this one you know I am all about retribution.....B.

Stopped here for the Lucky Leprechaun Giveaway - excellent story! I loved how your provided just enough background but not so many details as to bog the story down, just enough so that we too would want the retribution that Shar sought - and got! Great writing! I don't think I could come up with all that from a mere picture, wish I had that talent though. :)

Hi Michelle,
Oh that ass had it coming. yay for retribution! :) It was a great story, I know that was the end but I really want more

Michelle I did research before I wrote my story and I got everything right except the Red is fictional duh.....

I stopped by your site as I hopped through the Lucky Leprechaun Giveaway. Read this Flash Fiction entry. Your creation immediately grabbed my interest and I enjoyed every last word of it. To reveal what a sterling accomplishment that is, I should tell you that I'm one of those opinionated old ladies who has been reading Historical Romances for 30 years and doesn't see the need to branch out into the YA, UF, etc. craze. I may have to walk over to the Paranormal Section of the bookstore next time I visit and see if I might be missing out on some good books by wearing blinders.
--Vonda
2much2reid {at} comcast {dot} net

I had so much more to tell with this story - but I must confess to waiting until the very last minute to write it. LOL This week was a little busy with Breana being on spring break. I am glad you enjoyed it. :)

I'm glad you liked it Mama - but then again, you are partial and always like what I write. :)

I'm glad you stopped by. That is why I like the Blog Hops so much - it gives us a chance to find new blogs. Thank you for participating in the giveaway - and for your kind words about my story. We do a Flash Fiction every week and picture prompt is always a surprise. :) Some are easier to write a story for than others - but it is always fun. :)

Thank you, thank you. I can not tell you how much I appreciate your comment. Urban Fantasy is my favorite genre. I love action and strong, independent women - and UF is the perfect place to find it. :) I hope you will give it a try. Let me know when you do and if you like it. If you'd like some suggestions shoot me an email at kweenmg at yahoo dot com. I can talk books all day long. LOL

Thank you all for stopping by ladies. Have a great day.