Amy C over at Romance Book Wyrm and Dottie over at Tink's Place have come up with the idea for a Monday Morning Flash Fiction challenge. Each Monday a new picture prompt will be posted and if you choose to participate - you post your story on Friday - 350 words, give or take.
And here is picture prompt #32: 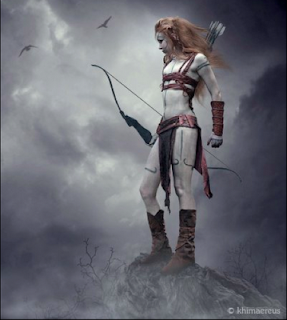 My Story:
The MarkingBy Michelle GreathouseBrinald completed her incantation and blew a powdery substance into Talah’s face - sealing the new markings she’d placed there.  “It is finished.”  Talah did not move, nor make a sound.  She had sat stoic throughout the procedure, having grown accustomed to the pain of the witch’s markings over the last fifteen summers.

Now at twenty-five summers, Talah was a full Warrior.  She inclined her head in acknowledgment and placed a bag full of herbs on the table - a sign of respect for Brinald.  Though the witch had never physically fought a battle - she was feared.  Talah thought it best to always leave a token of thanks.Talah left the witch’s cool, dark hut and walked into the hot midday sun, squinting her eyes at the brightness.  She was excited and possibly a little nervous - but she would never let it show - she was known for her level head in battle as well as her stoicism.  Any sign of weakness would give her Sisters pause.  From her right, Talah caught sight of a Runner headed her way.  She waited to see what the girl had to say.  Stopping a respectful distance from Talah, the girl inclined her head.  “Warrior, the Queen wishes to see you.”  Talah nodded once and changed direction, heading to the Queen.Two Warriors flanked the door to the Queen’s dwelling and Talah nodded in greeting.  Azar and Dwen had been with the Queen for more summers than Talah lived - each were fiercely protective of the Queen and fearsome in battle - their scar riddled bodies seen as testament to their dedication.  They nodded in return and moved to let Talah inside.When Talah entered she found the Queen cleaning her long blade and waited for the Queen to speak.  “Talah, thank your for coming.  I see your Marking has been completed.”  The Queen rose and moved closer to Talah, looking at both sides of her face.  “You know, you are the only woman to have received your full Warrior markings at such a young age.  You make me proud.  Talah, daughter - I am proud to be your mother.”  They did not embrace, that would be a sign of weakness, but Talah inclined her head to her mother, accepting her statement.“Now, what are your plans?”  The Queen moved back to her blade and continued to polish it - though it already shined as bright as the sun.  Talah spoke quickly, “I wish to mate.”  The Queen stopped polishing.  “Are you sure?  You are only twenty-five summers, you have five more summers before you need to breed.”Talah indicated a stool by the firepit.  “May I sit?”  Her mother nodded her assent and once again put the blade down.“I am curious and that curiosity is distracting.  I would rather get it over with, move on, so I can concentrate on more important things.”  Talah heaved a huge sigh, thankful to have gotten it off her chest.“Do you have anyone in mind?”  Margred was curious herself.  She had no idea her daughter entertained such ideas.  Talah had always come across as not interested in breeding - much less mating for the sake of mating.“I do.  I have watched him for a full summer.  He is strong and shows a surprising intelligence in his battle strategy in the ring.  If you permit, I would like to Hunt number five.”Magred called to a Runner.  “Have number five prepared for the Hunt.”  The Runner took off to do as bid.  “You will Hunt tonight.”  Talah nodded and rose to leave.  “Thank you.”  The Queen nodded.  “Hunt well, Warrior.”Talah entered her own dwelling and removed her clothes.  She readied a bath, using the carefully prepared soap that masked her scent without leaving an artificial scent behind.  Finished, she donned her leathers and boots and grabbed her  bow.  She was not Hunting to kill, merely to re-capture, so she would use a specially tipped arrow that only knocked out her prey.She could hear the growing crowd, and taking one last look around, Talah left her dwelling and made her way to the village center.  There she found her fellow Warriors gathered awaiting the Queen.The Queen entered, Azar and Dwen holding number five between them.  He had been fed well, groomed and clothed as well as given a solid pair of boots - the Warriors did not Hunt the weak - it would not be much of a challenge.  Only the very fittest of those held were Hunted.  It was an honor - even if they did not see it that way.“Tonight Talah will Hunt.  She has chosen number five.”  The Queen looked at number five.  “You will be set free and given a head start.”  Here she indicated a small time turner.  “When the sand runs out Talah will follow you.  If you can evade her, you are free.  If she re-captures you, you belong to her, to do with as she wishes, for however long she wishes.”Number five turned towards Talah and her stomach clenched.  Though his hair had been shorn, it was a dark brown that Talah found appealing.  He looked at her with his piercing blue eyes, not with contempt - which would have been expected - but with calculation.  He was sizing up his opponent.  Talah smiled.“Let the Hunt begin.”Number five raced from the village.The EndWord Count: 897I so want to finish this story. :)  I completely forgot about this weeks Flash, thank goodness Mama called last night and reminded me.  So I was frantically typing away this morning - the phone rang and I shouted at the phone.  I did not want to be interrupted.  LOL  I hope you enjoyed this one - I think it may be my favorite.
Posted by Michelle Greathouse at 9:23 AM

OMg O_O Michelle, that was awesome! I will totally put a curse on you if you do not give us an ending to this story. This is totally your best so far

Happy Friday to you as well. :)

I have 2 more parts - but it all depends on if the pictures fit. LOL

Have a wonderful weekend everyone.

I loved it! I want an ending!

It was lovely, really inventive and original! You must end it in an appropriate way - otherwise I might join Blodeuedd in cursing you! Incredible!

Blogger has been blocking me, but I find if I go through Network Blogs, I can get in! Yay!!

I agree with B, most excellent, and it needs an ending.... glad to see you have two parts ready, lol! I'll look around for some images, or if you find one you like, email me!