The Den of Shadows Quartet 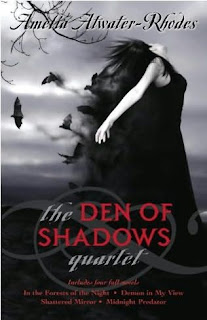 This is an omnibus 4 in 1 edition of the Den of Shadows series by Amelia Atwater-Rhodes.

I have wanted to try this series for some time now - so imagine my delight when I found this omnibus at Wal-Mart for less than $10. I love the cover.

This is a YA series.

Demon in My View
Jessica isn't your average high school student - she's an acclaimed published author of vampire fiction. Now two new students at her high school strongly remind her of her favorite characters. But those characters only live in her imagination-right?

Shattered Mirror
Christopher Raneva and Sarah Vida may look like a normal high school couple, but he's actually a vampire who's sworn off human blood and she's an incredibly powerful, vampire-hunting witch. As if that weren't enough to prevent their love, his past and her future collide when they get tangled up with Nikolas, one of the most reviled vampires ever.

Midnight Predator
Once a happy teenager, Turquoise Draka is now a vampire hunter. Her current assigment is to assassinate Jeshikah, one of the cruelest vampires in history. But to do that, she'll have to enter Midnight, a fabled vampire realm, as a human slave. . . .
Posted by Michelle Greathouse at 6:53 AM

Hi Michelle,
I looove looove these books by Amelia Atwater-Rhodes. They were the first YA books that I read.

I picked up the Quartet the other day, and thought of you. I think you and B will like them. She also has a set of Shifter-books that are just as good. :)

B read it as soon as we got home with it. :) I can't wait to read it. I think I am going to do a YA appreciation month in September and read some of those great YA books I have on the shelf.

I've heard about this book at the used book store. It was 5 dollars but I didn't get it cause my tbr pile is up the roof. Tell us how it is that way I'll get it next time.

Wow! That cover is freakin' amazing. I don't read much YA but that cover is certainly tempting.

Don't you just love Wal-Mart bookstores??? I always find something that I want.

Hi Michelle - Wow, great price you found, and how wonderful that they're all together! I'll be watching for your review to see what you think, and I hope you do decide to do the YA appreciation month. Thanks for the info! :)

I love the cover of this book!!! The stories sound like very interesting reading. Holy Moly! I'm running over to my Walmart asap! LOL!

You don't know me, but it was my art that was used for the cover, and I just wanted to say thank you to you (and to the other commenters) who liked the cover.