Book Cover & Promo: Beneath the Skin 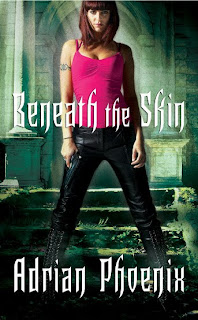 This is the 3rd book in the Maker's Song series by Adrian Phoenix.

CHAOS CONTROLS HIS FUTURE.
ONE MORTAL WOMAN COULD BE HIS SALVATION.
THE COUNTDOWN TO ANNIHILATION BEGINS WITH
DANTES CHOICE. . . .

The dark pieces of vampire rock star Dante Baptiste’s past
are violently emerging, and it is only a matter of time before
the Fallen discover he is the creawdwr they have sought for
thousands of years. The destruction he left behind in Oregon
threatens to reveal his identity as Maker and True Blood,
exposing the young nightkind to shadowy predators—mortal
and supernatural—who will do whatever it takes to win his
favor . . . or destroy him.

When beautiful FBI agent Heather Wallace went AWOL on
assignment, she chose irresistible Dante over the shady
government forces that now stalk them both. Heather has her
own secrets of the past to uncover, but she is also the only
one who can hold her nightkind lover together when his
dangerous quest for the truth threatens to send him over the
edge. And as she and Dante fight for their survival, she
realizes they must work together to protect their future--
before his mysterious destiny tears them apart….

Nice cover!! I have the first 2 books, need to get to reading~!!

I notice you have the cover art for Jennifer Armintrout's upcoming release in your sidebar. Have you read her Blood Ties series?

I've read the first book and really enjoyed it - I still need to get to the second one. :)

I have read the Blood Ties series and enjoyed it quite a bit. Have you read it?

I've read Adrian Phoenix's first 2 books and only thought they were so-so. I love the Dante/Heather relationship, but Phoenix writes from too many perspectives. All I really care about is Dante and Heather, but she throws in the POV of every bad-guy and minor character, it's frustrating.

Still, I want to know what Dante and Heather get up to, so I will most likely give this one a go too.

I love your avatar. :) I agree with you on the POV issue - that can get a little annoying - especially when it's every chapter. I like to read for enjoyment and the POV switcharoo makes me have to think too much. LOL

Hi Michelle - Another book I'm looking forward to! She did get some great cover art for it too. Thanks for sharing! :)